How to decide if inflammation is present

To decide if inflammation is present, there are some key findings that you should look for when evaluating the neutrophils.

It can be a challenge to decide if inflammation is present based in the CBC. The WBC count can be increased for many reasons and neutrophils are usually the most abundant cell type present.   The three general causes for an increase in the neutrophil count are inflammation, stress of disease (mediated by cortisol), and excitement (mediated by catecholamines). Of course, sick animals can have more than one of these things happening at the same time, but one is often predominant!

To decide if inflammation is present, there are some key findings that you should look for when evaluating the neutrophils. These include toxic change and a left shift in the neutrophil series. Toxic change is not a result of damage to the neutrophils – it indicates that neutrophil maturation in the bone marrow has been speeded up to meet demand. Inflammation is driving an increased rate of cell production. As a result, some features that are usually associated with earlier stages of maturation can persist to the segmented neutrophil stage.

Neutrophils normally have a segmented nucleus that has very coarse, condensed chromatin. Their cytoplasm is clear to very light blue/grey and does not contain any inclusions, as shown in Figure 1.

Toxic change can include several features, including nuclear swelling (puffy vs crunchy Cheetos appearance to the nucleus), Dohle bodies (small grey aggregates of endoplasmic reticulum that appear in the cytoplasm), and a more basophilic cytoplasm (indicating that more RNA is present – busier cells).

Indistinct vacuolation can also be present and results from swelling of organelles. One or several of these features can be present, and they may be seen in some or all the neutrophils that are evaluated. Figure 2 represents blood from a dog that shows moderate toxic change. Figure 3 is also from a dog, and severe toxic change is present. 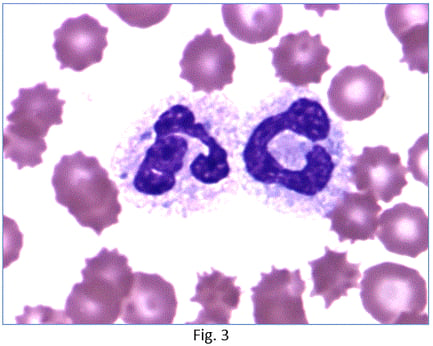 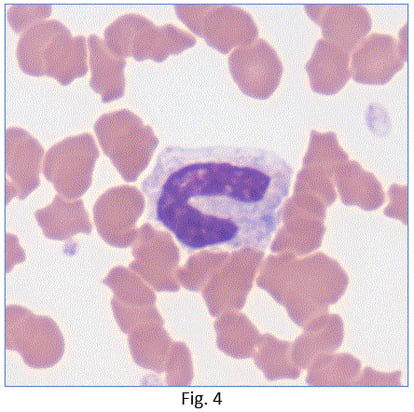 The presence of toxic change and/or a left shift is indicative of a response to inflammation. The severity of those things is often correlated with the severity of the inflammatory stimulus. If neither feature is present but the neutrophil count is increased, this could be due to stress of disease, excitement, or chronic inflammation (so that production has caught up with demand).

Click here to review a case study on inflammation.

Dr. Spangler earned her DVM from the University of California, completed a residency in Small Animal Internal Medicine and then a residency in Clinical Pathology. She was on the faculty at Auburn University for 17 years, and recently retired from that position. She is a writer/contributor for Ellie Diagnostics and is always supervised by at least one cat.

Why Do Lab Tests on a Healthy Pet?

Basic lab tests can be a screening tool and may allow for early detection of a problem before it becomes severe.

5 Ways to Enhance Your Practice with Ellie

Discover the Ellie difference by following these 5 simple steps. It's time to rethink your diagnostics.

How to survive any emergency with your pet

Pet parents can ensure the survival of their pets in an emergency by having – and practicing – a good disaster survival plan.

Get notified on our latest Ellie blog posts.

Be the first what's happening at Ellie Diagnostics, and get tips about the veterinary diagnostics industry.